I posted the following piece to the ACAQ Facebook page as part of our investigation into the proposal by Brisbane City Council to grant a 99 year lease over the Howard Smith Wharves precinct to HSW Nominees Pty Ltd.

HSW… who owns the land?

OK, so here comes part two…. by what authority can Council put the unique HSW cliffs into private hands?

BOREDOM ALERT… this stuff sucks, but it is important, and at the risk of being way less than 100% correct, I’ll try to make things as simple as possible.

Before we can get off first base, we need to know who owns the land on which the wharves are situated. To do this we need to identify the relevant land parcels, and then look up the land registry to identify the registered owner of each parcel. I have now done this, and the information is presented in the map below. 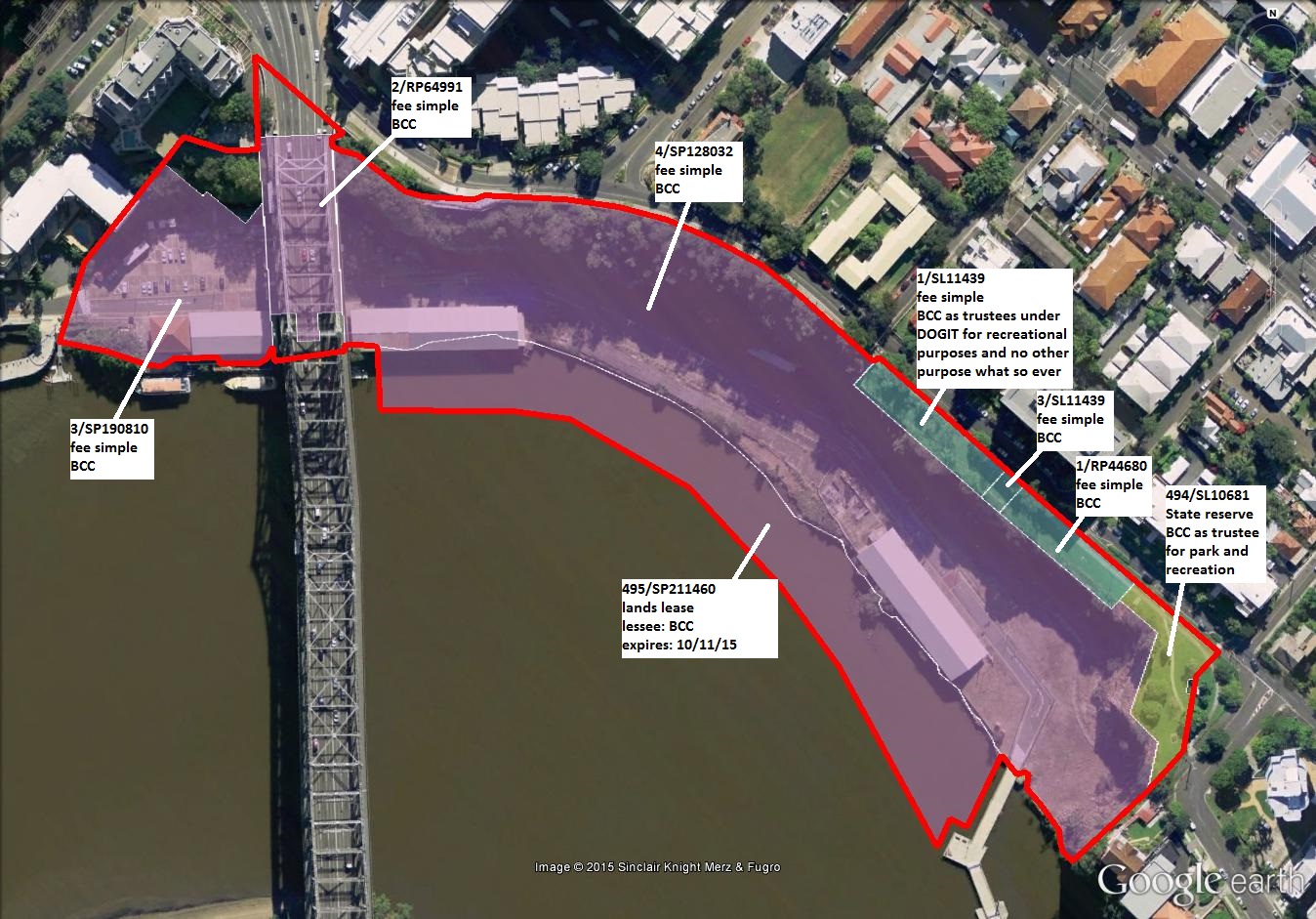 The four land parcels shaded mauve are the land parcels we believe are proposed for transfer to HSW Nominees via 99 year lease. There may be a couple of other small ones as well, but there is currently no information in the public domain that describes exactly what is being offered. I’ll cover this point in a later post. For now, I’m simply noting the titles for the four parcels that most likely will be leased.

From exchanges minuted in the Council Chamber, I believe that the small parcels across the top of the cliff will remain under Council management.

A quick explanation of the practical implications of land tenure might be helpful. In Queensland, there is a diminishing pool of unallocated state land from which land parcels for either private ownership or community purposes are from time to time excised. A land parcel is transferred to an individual, or corporate individual, under a Deed of Grant by the Governor in Council. Note that this is a State mechanism, and the authorising body, the Governor in Council, consist of a committee of the State Governor plus the State Cabinet. The Deed of Grant confers rights on the owner of the land parcel.

When such a parcel is described as being held in “fee simple” this is the strongest form of land ownership, one that provides a title that can be inherited by successors, and be bought and sold at the whim of the owner. Thus, when we see that Council holds most of the HSW estate in “fee simple”, this means that the various land parcels were excised some years ago and have most likely passed through the hands of several owners before being bought by Council. Notice that apart from the requirement to register the change of ownership, the State apparatus having excised the land parcel no longer has a continuing interest in its fate. Of course, when Council, rather than a private individual wishes to acquire it, then the State apparatus will raise its hoary head via The City of Brisbane Act, and perhaps other legislation, to enumerate what acts a Council may or may not do. However, this is a matter apart from the actual process of acquisition of the land parcel. This issue of Council owning land in “fee simple” worries me, mainly because I don’t see how adequate checks and balances can be exercised, and is something I’ll raise again later.

Coming back to the mechanism for allocation of unallocated state land, the Minister responsible for overseeing the execution of the Land Act may, from time to time, dedicate unallocated state land for one or more community purposes. Typical purposes are “park” or “recreation” and often both of these categories. This process gives rise to the tenure of a state reserve and we see such a land parcel at the far eastern cliff top of the HSW precinct. An example of a reserve for the community purpose of “park and recreation” well known to the climbing community is the KP Parklands. An important characteristic of state reserves is the fact they remain under the control of the state, and although local councils acting as trustees often manage them, the rules governing their management are primarily derived from state legislation. This legislation addresses many of the trans-generational pitfalls of public land ownership and management. If the HSW precinct was on state reserve rather than held in fee simple by Council, we wouldn’t be looking at the possible loss of the HSW cliffs to private control.